I want to take a moment to over lineage and inbreeding because I am noticing a trend of new owners who are breeding without a care for the health and welfare of their gliders and joeys.
Lineage with gliders is not what most people think of, in terms of other animals. Yes it does trace back family lines, because the gliders in this country have been here only 30 years roughly, and all the gliders in our country originate from the 5-10 colonies originally brought here so risk of inbreeding is very high unless you can trace which colony the gliders come from (lineage).
Just like with humans, inbreeding can have very serious consequences including birth defects and neurological disorders like the wiggles, a condition where a joey cannot hold their head still at all, which makes things like eating, grooming or just walking around difficult for them.  I've seen gliders missing limbs they were not born with and even cleft plate.
Lineage is not a way for breeders to make money, it is a safe guard from inbreeding.  Even if the joeys are born healthy, issues could show up years later like a female named Delilah who died from severe anemia and cancer.
She was inbred and we believe she only lived to be 4 because of that.  There are a million ways to make money in this world, but on the back of innocent creatures is morally and ethically irresponsible.
Breeding unlineaged is proof someone is only in it for the money.  Beware of breeders if you are a first time buyer.  Don't impulse buy any animal ever.  A good breeder will be willing to show proper lineage as well as  mentor any new owner.  If a breeder will not teach a new owner anything, it is a huge red flag.

Here you will find stories from breeders and glider owners that have taken in inbred joeys and gliders.  As I collect more stories and pictures this page will grow.
People always say there is no way their gliders could be related as they bought them from different breeders or states.
As a breeder, I as well as other breeders ship our gliders all over the United States.  This means that yes, they can be related.
These stories and pictures have been provided to me by the loving and caring new owners that have taken on the care of these precious babies. 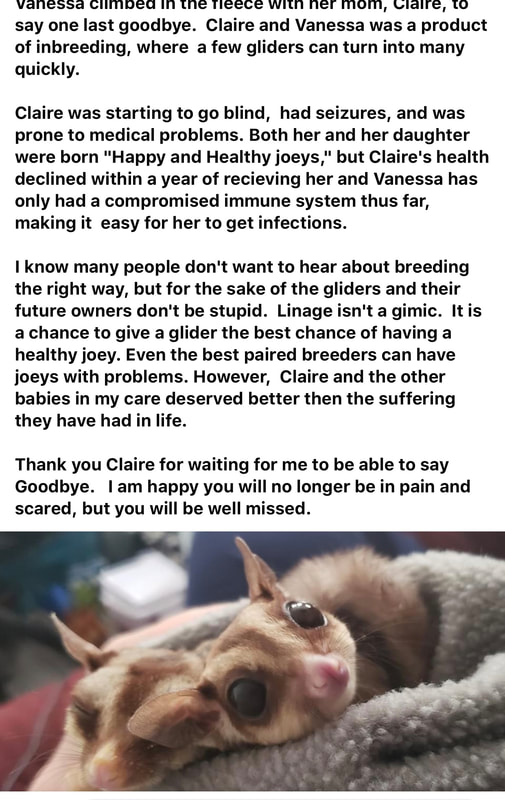 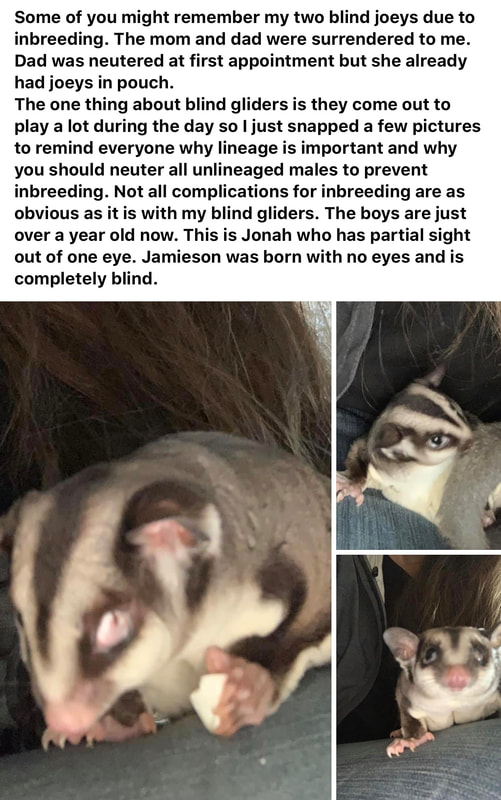